In Remembrance Of Pumper Pete Goff, Captain I 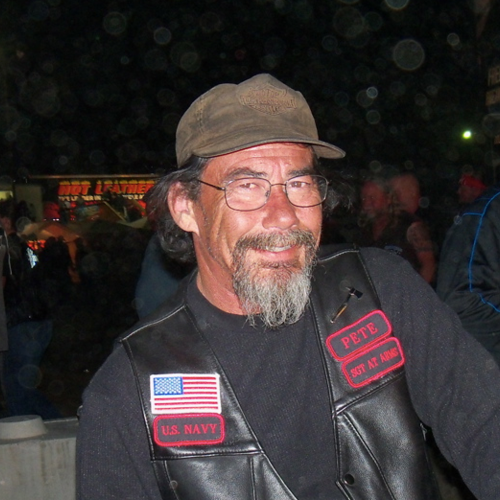 “Pumper Pete” was one of the founding members of the Fire Hogs M/C.  He was also the longest servicing Board Member before his untimely death.  Pete was a true “Biker” who lived in the true Biker fashion.  He always kept our M/C in alignment within the Biker code.   His worn and tattered Cut tells the story of his life.  Pete traveled the country many times over with his choked chicken hanging from his bike.  He loved the open road and never missed a chance to have a few beers with friends he had met in some of his favorite watering holes along the way.  His girlfriend Suzanne and best friend Pile Driver Bill shared many miles together and many drinks together at Cooks Corner.  His love for fish filet sandwiches is something no one will ever understand.

Pete was a regular at the Sturgis Motorcycle Rally with his crew.  He knew every backroad and shortcut as well as the best place to have a beer or watch the sights.  In 2020 over 30 Fire Hogs made a pilgrimage to Sturgis in his memory.  Beers were raised in his honor with many of the friends he had made along the way.  The Newbees, as he would call them, did his memory justice in their participation within the compound.   Pete loved being a biker and brought that to our Club including the Hogs Breath Biker games which have been forever renamed in his honor.

His leadership in the Fire Hogs have made it what it is today.   We thank him for all he gave to us and our M/C.  God Bless Suzanne and Bill, RIP “Pumper” Pete!