On Saturday, May 21, 2022, the LACoFD Fire Hogs M/C will be sponsoring the 6th Annual Firefighters Memorial Ride to raise money for the Los Angeles County Firefighter’s Widows and Orphans Fund. Come join us at Fire Station 126 ( 26320 Citrus Street, Valencia). Registration starts at 0800 hrs, ceremonies start at 0930 hrs with KSU at 1130 hrs. Travel with us as we through the canyons to our destination of the Route 66 Classic Grill (18730 Soledad Canyon Road, Canyon Country) for music/ luncheon and fund raising to benefit the Widows and Orphans Fund. All are welcome! If ya can’t make the ride meet us at the Route 66 for the luncheon Raffle and Music! Be there at 1200 to watch the riders come in!!  Join us for an afternoon of FUN!! Riders and NON-WELCOME 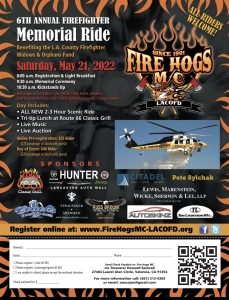 Get your tickets here: TICKETS

Once at Greg’s house in Bullhead City, the Fire Hogs were met by the Honor Guards from the LAFD and the Kingman AZ Fire Departments as well as a static display of an aerial with a Flag by the Bullhead City FD. At Greg’s house a blessing and prayer was given to the approx. 60 people in attendance by LAFD Chaplain Negrete. From there the Fire Hogs lead the procession with Ray Hamel on Ray’s bike, Greg Porter, Jimmy Coburn on Ray’s brother’s Bob Bike (who passed away two months prior) in the lead with Nick’s Family, relatives and friends following. The Bullhead City engine and Battalion Chief escorted us to the outskirts of the City boundary. From there the procession was met by the Kingman FD and escorted to the Funeral home in Kingman Az. As we arrived at the Funeral home, we were greeted by the Honor Guard and various FD apparatus from the Kingman FD. The bikes were lined up in front of the funeral home and Honors were presented as Nick and the family entered the Funeral home to pick up Brother Ray’s remains. The service inside the funeral home was conducted by Chaplain Negrete and Honors were bestowed upon Ray as they exited the facility which cumulated in the Fire Hogs conducting a Biker farewell for Ray and a moment of silence in his honor.

As we departed the funeral home with Ray Van Blarcom’s remains, every intersection was blocked by the Kingman Police Department. Along the processional route, Kingman ?re apparatus, with their respective personnel, were standing at attention tendering a salute. As we proceeded through downtown Kingman, the entire Kingman Fire Administration was at attention with personnel and apparatus. Our procession was escorted by Kingman and Bullhead Fire Command vehicles. We proceeded from Kingman to Bullhead City; where the Golden Valley, Clark County and Bullhead Fire Departments also staged with apparatus and personnel along the procession route. What a sign of respect for our fallen Brother as the procession traveled through the towns of Kingman, Golden Valley and Bullhead City. Our procession this day concluded at the home of Greg Porter, where the Bullhead Fire Department aerial ladders were ?ying the American ?ag as we arrived. A celebration of brothers Ray and Bob’s lives was enjoyed by those at Greg’s home along the Colorado River, with many humorous and loving stories told through the afternoon.

Two days later, the Fire Hogs, along with the family, escorted Ray to his son’s home in Lancaster, California. During the escort, Fire?ghter Ray Van Blarcom remains were in the possession of his son, LAFD Fire?ghter Nicholas Van Blarcom.

For nearly a week, Kingman Fire?ghter’s and the LAFD Honor Guards were posted with Ray’s body until we ?nally brought our Brother home. The Fire Hogs rode to the Kingman/Bullhead area in order to comfort the family, pay respect, and escort our Brother’s remains home to Lancaster, California. The Kingman and Bullhead Fire Departments went above and beyond the call of duty in supporting our efforts as well as the LAFD Honor Guard, Family Liaison J.D.Fox, Chaplin Negrete, Bullhead City FF Mike Villigran, and retired Fire Captain Greg Porter. Our efforts would not have been possible without the support of those who opened their homes and hearts to us at the last minute including; Fire Hog and LAFD Retired Fire Captain Scott Gould, Fire Hog and LAFD Retired Fire Captain Dan Costa, Fire Hog and Bullhead City FF Mike Villigran, Fire Hog and LAFD Retired Fire Inspector Frank Godoy, Cook extraordinaire Darrell Smith, and others I’ve failed to mention. I also want to recognize the following Fire Hogs who dropped everything at the last minute to be a part of something bigger than themselves: LAFD Fire Hog Chapter members: Taylor Gaskin, Tuzz, Darrell Smith, Bruce Newcomb, Jim Vels, Scott Gould, Jimmy Coburn, Greg Porter, Dan Foote, Bennie Orrantia, Dan Costa, Al Mackey, Frank Godoy, Bull Head Mike Villigran, and Jack Wise, from the LACoFD Chapter members: Doc, and John O, Friends of the Fire Hogs; John Lee, and Ray Hamel.

The Kingman Fire Department Honor Guard was created in 2007, in order to give our Fire Hog Member and active EMS Captain Danny Cypert a formal memorial ceremony. Danny was killed in a tragic motorcycle accident outside of the City of Kingman. Kingman is not a very prosperous community with ?scal constraints. We have no professional reciprocity with Kingman, but they choose to honor our fallen anyway. Their Honor Guard struggles to maintain their corps. The Fire Hog members and various other LAFD personnel conducted an impromptu collection and donated $1100 to their Honor Guard. Here is the link to the youtube video created from the escort: https://youtu.be/8cYwZOAlxCo. Ray was preceded in death by his brother Bob aprox two months before. Fire Hog Pete Goff who we lost three years ago is also pictures with the Brothers at the Sturgis Rally. RIP Ray, Bob, and Pete.

We wanted to get this calendar of Events to you’all early enough to schedule this year’s vacation and rides. This list is not all-inclusive as many more rides and requests for the Fire Hogs come up throughout the year.

Tentative Schedule: Note: Schedule is subject to change and further details will be announced as they become available.

2022 and will stage at the Hollywood Bowl. Staging begins at 8:30 a.m. and the ride will kickoff at

PLEASE MARK YOUR CALENDARS AND MAKE A POINT OF SUPPORTING EACH CHAPTER’S RIDES.

ITS GOING TO BE A GREAT YEAR OF RIDING!